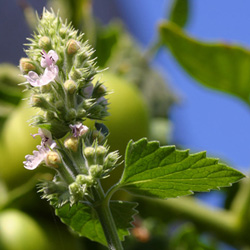 We often get asked why some cats love catnip so much, and why it affects some cats more than others, so here is a bit of information about this herb that drives some cats crazy!

Catnip is a natural herb that is part of the mint family, and is native to Europe and Asia but is now found in other parts of the world such as the United States. The plant features small shield-shaped green leaves, and commonly grows to between 50-100cm tall depending on variety. Catnip includes various aromatic oils, but the main one that gives cats a high is called nepetalactone, which is a mild hallucinogen found in the leaves and the stem of the plant.

When sniffed, catnip will stimulate a cat and produce a high that lasts between 5 and 10 minutes, however when eaten it acts as a sedative. Once the cat has had its hit, it soon goes back to normal with no ill-effects, but it can then take another hour or two before it’s ready for the next one.

Around 50-60% of cats are sensitive to catnip, and the effects of catnip seem to vary between cats. The tendency to react to or ignore catnip is inherited, although young kittens and older cats tend to have a lesser reaction to it, with kittens younger than 8 weeks actually being averse to it. Usually, the reaction of affected cats includes rubbing, licking or attempting to eat the catnip, rolling around in pleasure and sometimes drooling!

Catnip is also safe for us humans to consume (with the exception of pregnant women who should avoid it), although it doesn’t have quite the same effect on us as with our furry feline friends! It tends to have a sedative effect, and is also useful for settling an upset stomach. It is commonly drunk as a tea, but studies have shown it has a natural healing quality if fresh catnip leaves are crushed, dampened and applied to a wound.

Because of the way many cats react to catnip, it’s easy to see why catnip toys are so popular. As well as catnip-laced toys, you can also buy catnip in a spray or dried form that is ideal for applying to scratching posts to persuade your cat to use them, or refreshing old toys. Catnip is UV sensitive, and degrades when exposed to heat and light, so the best way to store it is in a cool dark area – ideally in a sealed container in the fridge or freezer.

If this article has persuaded you to treat your cat to a new catnip toy, then one we can recommend is the Yeowww Catnip Banana, filled with nothing but 100% organically grown American catnip!