Training a puppy is going to be tougher than training a puppy in a house. It’s a known fact and there’s no way around it. You have to be prepared for one of the trickiest times of a pet owners life made even more difficult. The key is to start early as you mean to go on. Be consistent.

Just like you would in a house, the most important start off point is to ensure your apartment is completely puppy friendly. Make sure anything dangerous, or valuable, that you don’t want to be chewed by your dog has been removed or moved out of reach. You might also want to invest in a dog-friendly first aid kit, just in case.

Living in an apartment means, unless you’re soaring high in the penthouse, that your apartment will be smaller than a house. This means that your pooch will have an absence of space, and a lack of grass or soil to relieve themselves.

Training your puppy in an apartment is an entirely different ball game altogether. After all, you can’t just open the back door and let your puppy run outside to go relieve himself, you have to be dedicated to taking walks every couple of hours, no matter what the weather. But that’s not the only thing. You’ll also need to make sure your puppy is getting plenty of exercise as it’s likely he won’t be able to run around as much as a dog who has access to a garden would.

Whilst you can’t miraculously create more space in your apartment, you can add puppy pads or artificial grass in a set area for them to relieve themselves. Whilst we were training our puppy, we had the puppy pad where we wanted him to go, which was on the balcony. We wanted him to know from the get go that he was expected to go outside to relieve himself.

Training a puppy to use the puppy pads are fairly simple, you simply lead them to the pad and then reward them when they go on it. Our puppy took a while to get used to them, having many an accident next to the puppy pad, or even better, believing they were a nice comfy pillow for him to sleep. It was a great way to make that first step into toilet training.

One of the best ways to reduce the chance of accidents in the apartment is to place your dog on a regular feeding schedule. Free feeding works for lots of dogs, topping up their food as and when, but if you’re dog is anything like our dog, he can’t cope with the lack of routine. He likes a strict feeding schedule which more than likely comes from the planned feeding as a puppy. 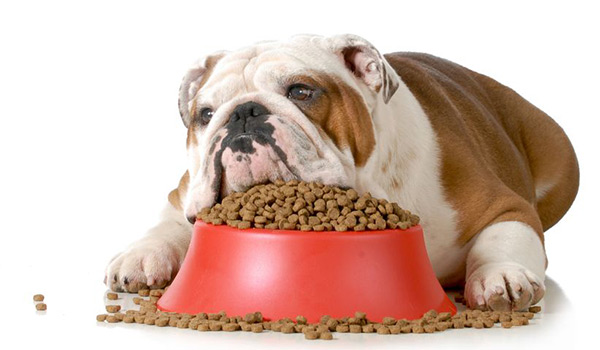 Placing your dog on a feeding schedule ensures that you can predict when he’ll need to go and relieve himself. That way, you can take him on his walk and treat him for going outside. It won’t take too long for your dog to start padding his feet, exhaling and wagging his tail at the door instead of having indoor accidents.

Not just in terms of their accidents, but things in general. Puppies love to get their paws on almost anything and with the smaller space in an apartment and the increased curiosity through confinement, they’re likely to go rummaging. Ensure that anything dangerous is well out of reach of your pup. That goes for trivial things like hair bobbles, clothes and shoes too.

Ensure that anything dangerous or breakable is stowed in a high up place or in a cupboard whilst training your pup and especially when you go out. It’s absolutely essential that your dog doesn’t have access to the dustbin whilst you’re out. Dogs love to rummage through the bins, sniffing out any scraps. The dustbin bag and the contents of a dustbin can be fatal for a puppy, so ensure that it’s emptied and well out of reach.

When a dog parks in a house or whilst playing in the big, open garden, the chances are the neighbours won’t even notice it. But, when a dog barks in an apartment, you’ll bet your bottom dollar that the whole block, the whole street and their dog will hear it. The last thing anybody wants is their neighbours from all four sides getting irritated with their dog which can cause problems later.

As a dog owner who lives in an apartment, you fear the sound of your dog barking. Before getting our puppy, I’d researched into dogs which are less likely to bark and which dogs are suited to the apartment living, which is why we have a King Charles Cavalier. He is happy pleasing us but, if you know anything about the breed, they cannot stand to be left alone. Once we leave, he will bark and cry. Luckily for us, he only does it for a few minutes so it doesn’t cause a problem. However, somebody who is leaving their dog for long periods of time, or a dog who is just a barker can be much more problematic.

You’ll want to stop your dog from barking too much at the very beginning. It’s a tricky one to master, you want your dog to be able to express when he’s upset or scared and be there to alert if he needs to bark, but the excessive barking is the one to nip in the bud. Most dogs bark when left alone through boredom, if you do go out, make sure your puppy has plenty of toys to keep him stimulated and enough clean, fresh water to keep him hydrated.

Another way to reduce barking is to ensure that your dog goes on a nice, long walk before you head out. That way, he’ll be tired and fully stimulated once he gets home. You might also consider leaving a blanket or a cushion that smells like you in his cosy corners that he will love to rest in and smell you whilst you’re away.

Your four legged friend doesn’t have the choice to run out of the back door and chase birds and sniff the outdoor air as he pleases, so it’s important to keep him entertained and stimulated in other ways between his regular walks. 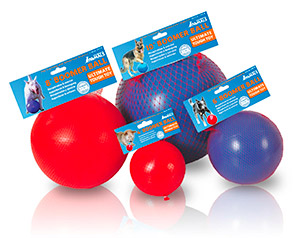 Whilst you may not be able to play a fully-fledged game of long distance fetch, you can still play indoor fetch. Our puppy loves when we throw his toys from the balcony into other rooms, or bounce his ball so he can chase after it and see where it goes. He also loves when we hide treats in different areas of the apartment for him to go on a sniffing treasure hunt. He also loves the occasional game of tug-of-war.

Puppies love toys! Make sure you have a big stack of them ready for him to play with whenever he wants. It’s inevitable that your apartment floor will never been seen again thanks to his ever-growing collection of toys that will be scattered around, but we wouldn’t have it any other way.

Check out our review of Tough Dog Toys for some ideas!

If you are planning to get a dog and you live in an apartment it’s absolutely essential that you research the breed before taking them in. For some dogs, apartment living just isn’t suited to them. For others, typically smaller breeds, they will handle living in an apartment perfectly fine.

How your dog will handle being in an apartment depends on their size, temperament and energy levels, which can fluctuate even amongst the same breed. As a general rule, as long as your puppy is well stimulated, all of his basic needs are met and he has set boundaries, he will adapt well to apartment living, it just takes time.

Our dog has been living in an apartment for a year now, after moving from his first apartment that he was trained in, and he is completely relaxed and at home. He knows when he has his walks, he knows where to find everything and he loves the cosy corners he has around the apartment. When we’re in, we ensure we have the windows open, not just to let a breeze in but to allow the smells of the outside in. He loves sitting on the ottoman taking in all the smells and sounds and catching a glimpse of the street below, always make sure your dog is properly supervised when the windows are open and that he isn’t able to jump!

Training your puppy to live in an apartment and be properly potty trained can take anything from a few weeks to a few months. It all depends on your consistency, the stubbornness and obedience of your dog and the number of accidents. In general, a dog will be trained by 5 months old. Remember: a dog can hold themselves for around one hour for every month of their life. Never scold a puppy for having an accident. They don’t respond well to negative reinforcement, all you’ll do is impart fear.

Stick to positive reinforcements and your pup will love his or her apartment in no time!